suturo.com is a new dynamic and interactive website that reacts uniquely to each visitor as they navigate the site, allowing for exploration that fosters new formal and conceptual perspectives between the art, the poems, and the viewers.

King Combucha is a still-drawing movie, with an original voiceover and soundtrack. It takes inspiration from a genre that was popular in the 1960s, and simply known as "still image film", a film made of still drawings and based on editing and camera movement, rather than animation or live-action. King Combucha is written and produced by Israeli artist Dan Allon and Finnish artist Ari-Pekka Leinonen. The film was created during a residency at Hordaland Kunstsenter in Bergen Norway in 2020, and was completed by working remotely, between Israel and Finland during 2021.

It narrates a story of two misfortunate travellers, who cross paths unintentionally three times during their trips, affecting each other's destinies. The outline of the story is a "journey story", based on three diaries Allon's had written, starting in 2001 on a trip to Peru. It then goes on to 9/11 New York, and ends during the Covid-19 Pandemic in Brazil. It incorporates some 400 drawings, divided into three chapters, accompanied by two narrators, opening up their feelings, thoughts, and dreams. The characters deal with their vulnerability, lack of self-confidence, and self-deceit, while they explore unfamiliar territories, carrying the profound feeling "someone's paradise could be someone else's hell". They have overlooked the privilege they had while travelling, even when they chose to travel when it was almost impossible. This film is also about proportions: choosing to focus on small self-centered details, when the world seems to collapse.

Based on a story by
Dan Allon

L=10 is a minor tragedy about an inability to L=10.
To overcome this incompetence a loudspeaker-headed-puppet prepares to leave I behind in order to enter the world of U.

This message was brought to you by gateway to solar trance
leave your earthly fears behind and step in:
"
NO_RIGID_SELF_EVIDENT_USER_INTERFACE
EMBRACE::NEW::EXPERIMENT

Project was supported by Sound Development City and Taiteen edistämiskeskus

The band is playing feature music, the kind you buy a ticket for at your local theater.
The album is best enjoyed at dark cinema with a loud soundsystem.
https://jacobsleinonen.bandcamp.com/
2020 Shipwrecked Waltzhop, an electronic music release with Bert Jacobs


AP and Bert are shipwrecked on a small deserted island, somewhere near Bermuda.
The only communication they have is via radio.
While being stranded they decide to make a pop-song while waiting in isolation.

The rescue boat doesn't seem to pass by any time soon.

Two videos from our artists-in-residence

HKS is happy to share the first preview of "King Combucha", a new film by residency artists Ari-Pekka Leinonen and Dan Allon, alongside a recorded conversation between the two discussing the process behind the work.

Ari-Pekka Leinonen and Dan Allon were Hordaland Kunstsenter's artists in residence for November/December 2020. Travelling from Finland, Ari-Pekka stayed as the guest artist in Bergen whilst Dan, located in Israel, joined the residency as a digital presence.

Over the residency period they worked on a still-image movie titled "King Combucha", an image-based film with a voiceover, in a genre that was prominent in the 1960s. The outline of the story unfolds a journey that started 20 years ago in Peru, went through 9-11 in NYC, and ended in current Sao Paulo. The main motives are vulnerability, lack of self-confidence, self-deceit, and the irony of telling a traveling story in a time when traveling is impossible. We sometimes do not appreciate our luck until it is too late to acknowledge.

The full film will be screened after completion in 2021.

TV Eldorado or Clarinet Ivan and the Weddingband is a 2019 experimental film made by Jacobs & Leinonen.
The story revolves around a group of strangers who sign up for a mission in search of the lost Thracian gold.
Soon after the adventure kick-starts the unexpected happens.

After his nocturnal walk for last year's Night Shift in Brussels, sculptor and storyteller Bert Jacobs now joins forces with the Helsinki-based audio-visual artist Ari-Pekka Leinonen. With their brand-new performance, they wildly speculate on the quaint events that have led to The Beatles' break-up and hatred between the legendary song writing duo Lennon-McCartney. Heartbroken Uncles 5 Karaoke Band explores themes floating between toxic egoism, stardom, success and failure. Expect a not-so-average musical farce with harmonious looks and sabotaging intentions.

A house, imaginary or real, is one of the most significant integration powers for the thought, memories, and human dreaming. Ernst Pinossi's house, an installation of a music-related room and dwelled spaces all combined into a multi-layer time- distorting story, will act as a symbol, catalyzing memories and immortality in the spectator's mind. It is a place where imagination and memories are undissociated. A performance, installation and a radio show by Dan Allon, Ari-Pekka Leinonen and Bert Jacobs. The installation consists a radio shack, in which the trio reenact his music, show photographs from his life (a combined selected images of non-professional photography from the life of Allon, Leinonen and Jacobs), and wait for his arrival for an interview live in the studio. As the show goes it becomes unclear if he really exists, or is he a combination of the dark sides of the three. 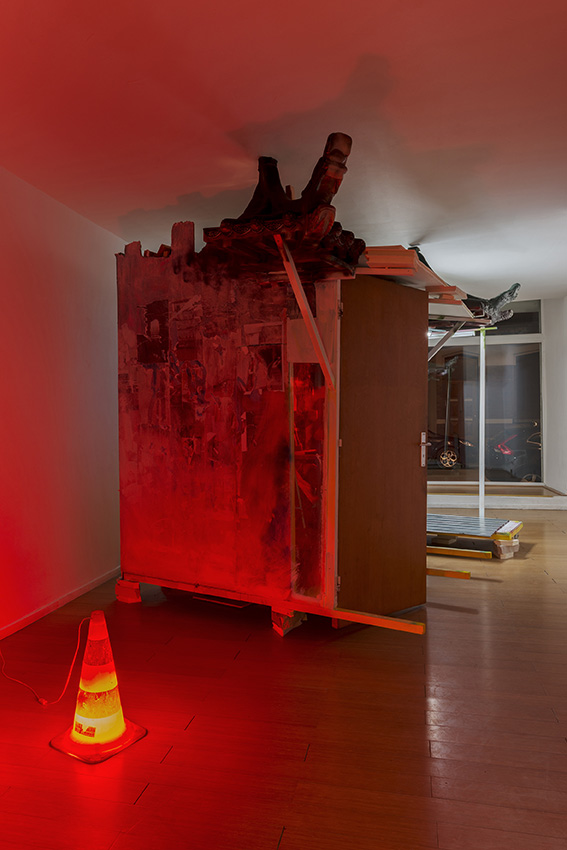 Eldorado is an experimental film that shows the impressions of two foreign artists who, in overtime, sought and examined the ideas that shaped the Bulgarian city of Plovdiv as the European capital of culture. Questions are asked like where is the budget? And to what extent does such a phenomenon need state intervention? Imagine a fairy tale told in footage from Plovdiv.

Bad Research was a performative collaboration between Ari-Pekka Leinonen and Dan Allon, started in 2016. The project transcended cities and countries, narratives, and practices. It is comprised of different, yet well connected episodes; each is dedicated to a place on earth, and unfolding story and a performative rolling action of collecting material and digesting it. Work was documented into a web page consisting videos, audio, pictures and text.

With five different finished episodes, we have consulted Bad Research tackling topics of terrorism, fake news, national histories, current politics, rock music, psychoanalysis and humor to mention a few. We have openly expressed our naive and irresponsible prejudiced attitudes while inspecting various serious phenomena. Our work tries to expose via laughter things that oppresses us, as well as the mechanisms that make us classify and discriminate.

Episode 1 - An ecoterrorist wants to start a new religion in Jerusalem
Episode 2 - A duo of artists talk about life, in the time of the 2016 US-election
Episode 3 - A recruitment of Tahini-based terror group and its dismantling
Episode 4 - A philosopher criticizes cartoonist for "disgraceful" Holocaust art and reconsiders the limits of humor
Episode 5 - A duo of historical kings, go through therapy and compose a rock opera http://unpracticedknowledge.com/

This work by Ari-Pekka Leinonen and Dan Allon (aka Bad Research) is a site-specific multi-disciplinary performance. The work evokes questions regarding the nature of artistic research, the relationship between war and humor, and interweaving the history of conflicts with the history of rock music.

This episode, the 5th they created, consists of a rock opera, alongside with a musical release entitles "ROKKENROLLERS – Unpracticed knowledge," and multi-layer video works, some stand for video-clips for the songs. All material was created under a disguise of a multitude of characters, mainly those of two obscured generals who came to Brugges to overcome a trauma through making music. The performance, video, and album, which all to be featured on a unique website, combine the history of rock and war, which was initially contradictive, in a hilarious dialog.

The exhibition would suggest three ways to experience the episode:

• A live performance, including psychotherapy sessions, and a concert of the song, accompanied by the animation videos.

• A listening room for an in-depth listening experience of the rock opera.

• A "Bad Research" library, in which the spectators can go through the story on the website. In addition, a small numbered edition of the album for sale.

2017 The Gas Bill, iBazar/t part of The Wrong internet biennale

2016 I am Helping My Friend to Think / My Friend Is Helping Me to Idle, Madrid & Casblanca

2016 Tyhjäntoimittaja - Reporter of Nothing, experiment in public space, Helsinki Finland